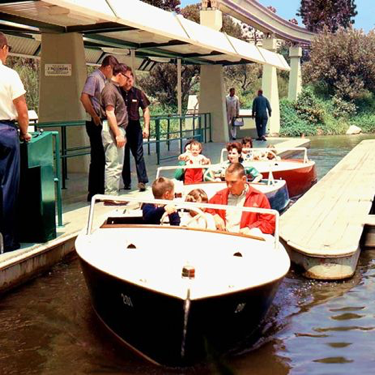 Who will bring me to the fortified city? Who will lead me to Edom? Is it not you, God, you who have now rejected us and no longer go out with our armies? Give us aid against the enemy, for human help is worthless. With God we will gain the victory, and he will trample down our enemies.

This summer I celebrated the 50th anniversary of a life-changing event—my first and only visit to Disneyland in Anaheim, California. It was the summer of 1969, and my dear Grandma Jenny decided to load four of her grandkids (ages 7-12) into a VW bus and drive us to California and back. It was an unforgettable adventure! Despite the cool van and the Jack Kerouac-type road trip, my grandma wasn’t a Hippy—not even close—but as it turns out she was pretty hip. And we grandkids reaped the benefits of her adventurous spirit!

Truth be told, I don’t remember many specifics about the trip. I remember seeing the Grand Canyon (got yelled at for going to close to the edge), I remember the San Diego Zoo (awesome!), and I remember the near-spiritual wonder of being a child in Disneyland. There were rides and adventures everywhere I looked: The Matterhorn, Swiss Family Robinson Treehouse, Small World…and of course the much less-known Motor Boat Cruise. The cruise sticks out most in my memory for some reason, perhaps because it was the one ride I remember “driving.” I proudly took my turn behind the wheel, turning back and forth wildly, as Grandma kept warning me to watch where I was going and steer straight. I think we both knew that the boats were riding the rails under the surface (at least I did), but it was fun to imagine that I was actually in control. After all, the ride was located right on the border between Fantasyland and Tomorrowland…and that’s exactly where I found my eight-year-old self as well!

Psalm 60 is another song of David. From the inscription at the beginning, it appears that David wrote this psalm during the early part of his reign, when Israel’s army was racking up victory over victory over their neighboring enemies—Philistia, Moab, Ammon, Syria, Amalek and Edom (read  1 Chronicles 18:11-13, 2 Samuel 8:1-8, 2 Samuel 10:1-19). Oddly, however, the song doesn’t seem to celebrate David’s victories. Instead, it begins with a lament, “You have rejected us, O God, and broken our defenses. You have been angry with us; now restore us to your favor.” (vs. 1)

It’s a perplexing juxtaposition to be sure. Perhaps the song was written as a prayer for help when the outcome of these battles was still in question. Maybe the stories recorded in Chronicles and Samuel conveniently skip past the unpleasant setbacks along the way to victory. Or could it be that David, in the wake of a strong movement of God somehow knows he still hasn’t seen the fullness of God’s greatness? Whatever the disconnect, Psalm 60’s inscription invites us to dig in deeper. This song, we read, is “useful for teaching.” So, what can we learn?

Like every other one of David’s songs, Psalm 60 makes one thing clear: God is in control. In fact, that is a pervading theme of scripture, from Genesis to Revelation…from creation to glory. If we don’t learn that, we can get ourselves into all kinds of trouble. God is in control of everything in my life…not me. One day, that fact will no longer be in question, but for now I need constant reminding. It’s a hard truth that tamps down my pride and produces humility. But it’s also a magnificent truth that breaks me free from present fears and future anxieties. David’s experience, and his songs, remind us of that truth again and again.

When the “victories” are coming fast and furious it’s tempting to think we are actually driving the boat. Of course, it’s part of the Father’s plan to pick us up and sit us down right next to Him in the front seat…to continually whisper in our ear (or holler sometimes) that we need to keep our hands on the wheel and our eyes on the destination. He invites us to drive, even though we both know we are riding the rails. He encourages us to run the race—on the course He has marked out for us—and to run it in the right way and in the right direction (Hebrews 12:1-3). But God is still in control.

And if we can learn that humbling, pride-killing lesson in the good times, we can also claim the comforting truth of God’s control when things become impossibly hopeless. “If God is for us,” Paul writes to the persecuted church in Rome, “who can be against us?” (Romans 8:31).  Answer? No one!

There’s an old Latin proverb that reminds us “Man determines his actions, but God determines his destiny.” That truth might be comforting to you today, or it might be confronting. But as we find ourselves on the border of Fantasyland (I must be in control) and Tomorrowland (no, God is in control) it’s the most important lesson we can learn. Drink deeply from the source of that truth, and always stay thirsty for him!