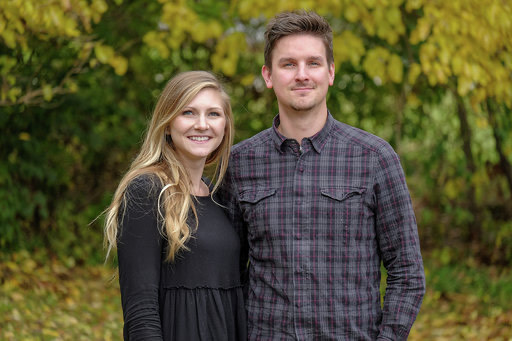 Nate grew up in a large family and began his musical journey at a young age.  He began playing mandolin in his family’s bluegrass band.  In 2005, Nate began leading worship at Fresh Start Church (Kalamazoo) at just the age of 16 and continued to lead in that capacity for 10 years.  Nate also led regular times of praise and worship for the Kalamazoo House of Prayer starting in 2013 and continues to cooperate with this local ministry. Nate is a graduate of Grand Valley State University earning a degree in economics.  In addition to his ministry work, Nate works full time as a branch manager for Mercantile a Bank of Michigan.

Laura grew up in the church and has always been involved in ministry for as long as she can remember. As a young girl she was part of the children’s worship for Radiant Church (Richland).  Later she began singing on the Radiant worship team in 2011. Laura then joined up with the Kalamazoo House of Prayer in 2013 and led worship during intimate times of prayer and intercession. Laura has worked as a paraprofessional at Woods Edge Learning Center she also owns her own event planning business, Pretty Princess HQ.

Nate and Laura have been serving in church ministry together for 5 years, primarily in the area of praise and worship.  Both have a rich history of music and thoroughly enjoy sharing the gifts that God has so freely given them with each other and the church.

Nate and Laura were married in October of 2015. They met doing one of their very favorite things, leading worship at the Kalamazoo House of Prayer in 2013. Nate wasled by the Holy Spirit to join the staff of The Living Well Church as worship directors in December 2018.  They have one child–Asa Benedict Schubkegel.  Nate and Laura enjoy spending time with their families, playing in the outdoors and of course, sharing the joy of music together.
Contact Nate and Laura at: nate@thelivingwellkzoo.org
Previous Profile LinkPastor Philip RoseNext Profile LinkKaren Jacobs